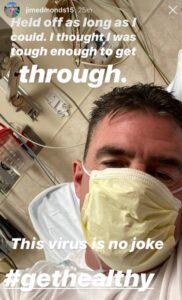 Former Cardinals outfielder Jim Edmonds St. Louis broadcaster posted on Instagram that he underwent tests Saturday for COVID-19 after he felt “super sick.” He posted a video saying that he had tested positive for pneumonia. The eight-time Gold Glove Award-winner and four-time All-Star played 18 seasons in the majors with the Cards, Angels, Padres, Cubs, Brewers and Reds. He was elected by the fans to the St. Louis Cardinals’ Hall of Fame.