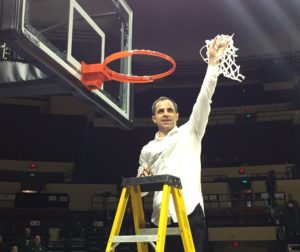 McCollum has become a regular as NABC Division II Coach of the Year, winning the honor in three of the last four seasons. The Bearcats finished the season with a 31-1 record and were ranked first in the final NABC Division II poll. McCollum won his sixth MIAA Coach of the Year honor as Northwest closed out its season on 23-game win streak. Northwest surpassed the 30-win mark for the fifth time in program history (third time in four years) and the 20-win mark for the ninth consecutive season.

“I would like to accept this award on behalf of my players who deserve the national accolades,” McCollum said. “I am humbled and thankful to be able to coach the best players in the country. I would also like to thank the NABC for everything they do to support college basketball and for honoring our program with this award.”

McCollum equaled Cal State Bakersfield’s Pat Douglass for the most NABC Division II Coach of the Year awards with three. Douglass captured his awards in 1993, 1994 and 1997. McCollum has been the NABC Coach of the Year in 2017, 2019 and 2020.