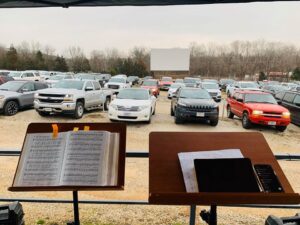 A church in eastern Missouri has figured out a way to reach its parishioners in person, but with plenty of social distancing. The Pleasant Hill Christian Church in Potosi  is meeting at the Starlight Drive-In in rural Washington County

“It was a joke at first,” says Pastor Trevor Kean. “We had tried to collaborate with the church leaders on what would be our next steps, knowing that these guidelines were going to be more emphasized on distancing ourselves, limiting numbers and gatherings. “I just kind of suggested it as a joke and thought ‘hey let’s just do it at the drive-in. Someone said ‘hey that sounds perfect, let’s reach out.’”

Kean explains how they were able to pull off the idea.

“They have a microphone that comes from the upstairs part of the drive-in,” he says. “And then everyone will be tuned into the FM radio channel that they had assigned to it.”

And how do they engage with a congregation of cars?

“We asked that if you are having a great time or this is a great thing, flash your lights at us and let us know how things are going. [There were] a lot of honked horns, flashing lights, blinkers, whatever they could do,” Kean says. “We had a lot of people reach out afterward, thanking us for offering that.”

The drive-in sits in a field near the busy Highway 21 between Potosi and Cadet. It has been around since 1952.

Thanks to Chad Speakar of Missourinet affiliate KREI in Farmington