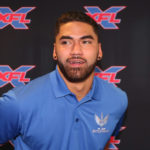 Jordan Ta’amu, a quarterback, is introduced as the first player to be selected by the XFL Photo by BIll Greenblatt/UPI

The Kansas City Chiefs have signed St. Louis Battlehawks quarterback Jordan Ta’amu He threw for 1,050 yards, five touchdowns and two interceptions in five XFL games in St. Louis. He will compete with Kyle Shurmur for the third string quarterback spot behind Chad Henne who was signed last week to back up Patrick Mahomes. With the Battlehawks, Ta’amu ranked 3rd in the league with passing yards. Ta’amu played at Ole Miss but went undrafted in 2019.