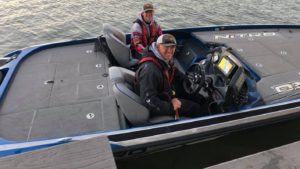 The Drury bass fishing team moved up three spots and is ranked sixth in the nation in the latest Bass Pro Shops School of the Year points race. Their number six national ranking matches their highest placement in the points race in program history. McKendree, with 12,465 points compiled so far this season, leads the points race while the University of Montevallo (Ala.) ranks second with 11,445. Adrian (Mich.) is ranked third (10,685), Auburn is fourth (10,565), and Murray State is ranked fifth (10,540).

The Panthers have 8,720 points through 10 tournaments so far this season. The national standings are based on points schools accumulate at sanctioned events throughout the year.

The Drury bass fishing season is currently on hold along with Drury’s NCAA spring sports in response to the national Coronavirus epidemic. Their next scheduled competition for the Panthers is May 6-8 at the Carhartt Bassmaster College Series tournament at Lake Cumberland in Russell County, Kentucky. The final points tally, and the national champion is announced in early June.