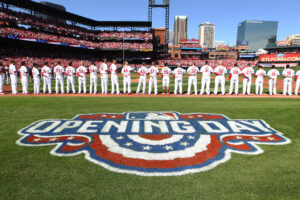 Major League Baseball announced Monday that the start of the 2020 regular season will be pushed back even further following Sunday’s recommendations by the Centers for Disease Control (CDC).

The CDC has urged a nationwide halt of any gatherings consisting of more than 50 people for the next eight weeks in response to the coronavirus outbreak. Opening Day, which was originally scheduled for Thursday, March 26, had already been postponed for two weeks as of last Thursday.

Cardinals starting pitcher Adam Wainwright, who is winding down is career and isn’t sure how many more starts he has left, took to Twitter to share his thoughts.

Such a weird time. I’m sad We don’t get to play, but it’s deeper than just our desire to compete. At our core we’re entertainers. We know that a big part of our job is to bring happiness and entertainment to all of you. Looking forward to bringing lots of joy this year! #12in20