(INDYCAR)—If the season matches the off-season in INDYCAR, this is going to be quite a year. The first race is next weekend on the streets of St. Petersburg, Florida. The off-season has been an active one with Roger Penske becoming the new owner of the series and of the Indianapolis Motor Speedway, new drivers with new teams with a lot of veterans staying put and one fan favorite wrapping up his fulltime career as a driver. Add to that the testing that has developed the Aeroscreen cockpit safety system to the addition of new teams, the ongoing search for a third engine manufacturer and the increased number of fulltime teams, and INDYCAR looks to 2020 as a fresh start.

The president of INDYCAR is Jay Frye, a former University of Missouri football player who has led the sport since December 2018. Before that he was the president of competition and operations for three years.

We interviewed him a couple of days after Ryan Newman’s frightening crash in a NASCAR race and shortly before two-time Formula 1 champion Fernando Alonso signed with the Arrows McLaren team to drive in the Indianapolis 500. Alonso had driven for McLaren in his last F1 seasons. The team at Indianapolis, however, will be Chevrolet powered. Honda’s Formula 1 effort has been powered by Honda. Alonso had voiced disappointment at Honda’s power for the F1 team, leading Honda to refused to let him drive with a Honda-powered team for the 500.

(NASCAR)—Joey Logano has won half of NASCAR’s Cup races this year, adding Phoenix to his wins list along with Las Vegas two weeks ago. Logano kept nine-time Phoenix winner Kevin Harvick behind him on restarts at the end to get his second win in four races this season.

Logano bounced back from a pit penalty that put him at the end of the field for a restart on the 138th lap. A jack failure on a later pit stop dropped him from contention back to 18th. He quickly regained the lead, passing team mate Brad Keselowski on lap 279 of the 216-lap race and held control until the end. 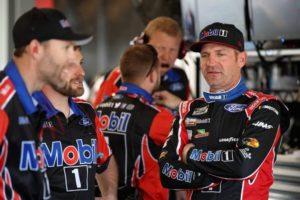 Clint Bowyer, who started eighteenth, was running sixth at the end of the race. His performance moved him from 16th to thirteenth in the points.

NASCAR heads east next week to race on the high banks of Atlanta.