The party primaries are Tuesday in Missouri and this is the first featuring just two major opponents vying for the delegate lead. 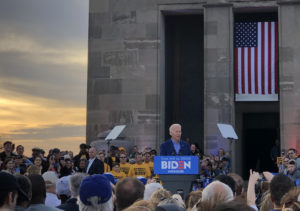 At his appearance in Kansas City late Saturday afternoon, Biden primarily focused on his own past and President Trump.

He referenced his opponent indirectly, telling the crowd of between one and two thousand he was the positive campaign alternative, though he stumbled over the past in making the point.

“You want a nominee who will bring this party together, who will run a progressive, positive campaign and turn, turn this primary from a campaign that’s about negative attacks into one about what we’re for. Because we cannot get reelected, cannot win this reelection, excuse me, we can only reelect Donald Trump if in fact we get engaged in this circular firing squad here,” Biden said.

However, he lasered in his message when a few hecklers began shouting in support of the proposed Homes Guarantee by the Chicago-based People’s Action organization. Sanders has spoken in support of the plan to ensure housing for every citizen.

The protesters would not stop yelling when he addressed them.

“If you listen I’ll tell you. This is not a Trump rally, OK?” He countered. “You have reason to be upset. Would you be willing, the three of you, to talk to me after this is over? Because I am going to make sure you are not evicted when I am the president of the United States of America, you can’t be!”

The prevailing message in his 14-minute speech was unity:

“I believe we’ve been delivered to a moment where we’re in a position not only to defeat Donald Trump, where we’ll have an opportunity if we think big enough and bold enough to build a future this nation needs and deserves.”