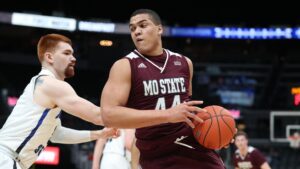 Gaige Prim led five Missouri State players in double figures with 17 points and 8 rebounds to push the sixth-seeded Bears past Indiana State, 78-51, here Friday in the quarterfinal round of the Missouri Valley Conference Tournament.

It was the largest margin of victory by Missouri State in its 30-year history at Arch Madness and its highest offensive output at the event since 2004.

MSU’s win capped an upset-crazy quarterfinal day at the Valley Tournament. Top-seeded Northern Iowa fell to No. 8 Drake. No. 4 Bradley topped No. 5 Southern Illinois, and No. 7 Valparaiso knocked off No. 2 Loyola in overtime to set up the semifinals. On Saturday, Drake and Bradley play at 2:30 p.m., in advance of the Valparaiso vs. Missouri State semi at 5 p.m.

Friday was the first time in tournament history the top three seeds all fell in the quarterfinal round.

After leading by 10 at the half, Missouri State kept the Sycamores at length most of the final period. Before the first media timeout, the Bears had tacked on 15 points and extended their lead to 48-30 after a 3-pointer by Cook.

Missouri State kept Indiana State scoreless for the last three minutes and tacked on seven unanswered points down the stretch to win it by 27.

For the game, the Bears scored 21 points off ISU’s 16 turnovers and tallied 40 points in the paint with front-court standouts Da Silva, Prim and West combining to go 20-for-35 from the field.

It was just the sixth time this season – and second game in a row – the Bears had made at least half their field goal attempts.

In the first half, Missouri State used a 6-0 run led by Mosley and Prim to overcome a three-point Indiana State lead nine minutes into the opening period. Mosley’s jumper at the 10:49 mark made it a 13-12 game, and the Bears allowed just three Sycamore field goals the rest of the half.

West reeled off six points in a key three-minute stretch to make it 25-18, then his jumper with 1:40 remaining in the period put the Bears up by double figures for the first time, 31-20, en route to a 34-24 lead at the break.

The Bears will square off with No. 7 seed Valparaiso (18-16) in Saturday’s second semifinal, which will tip at 5:00 p.m. (Central) from the Enterprise Center with national TV coverage on CBS Sports Network.