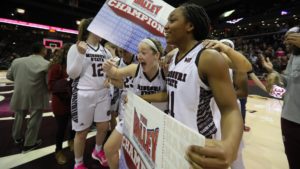 Six players scored in double figures and No. 21/23 Missouri State hit a season-high 11 3-pointers Thursday evening to claim its first Missouri Valley Conference regular season championship since 2012 with an 85-70 victory over Valparaiso at JQH Arena. The Lady Bears (25-4, 15-2 MVC) clinched at least a share of their 13th regular season title since 1990 and the No. 1 seed in next week’s MVC Tournament, all while improving to 14-0 at The Q this season ahead of Saturday’s 2 p.m. Senior Day contest against Loyola.

Missouri State led 16-6 in less than seven minutes on one of Elle Ruffridge’s five 3-pointers and never trailed in the contest, but not without a fight from the Crusaders (16-12, 8-9), who rallied to tie the score three times in the second quarter before Ruffridge buried another trey at the halftime buzzer for a 40-37 advantage.

Valparaiso failed to hit a field goal for more than five minutes to open the second half as MSU’s lead grew to as many as 11 points and remained there when Brice Calip drained another buzzer-beating trey to end the third quarter up 65-54. The Lady Bears kept the lead in double figures for the rest of the contest as Calip and Alexa Willard shared team-high scoring honors at 17 apiece, with Willard becoming the 12th player in school history to surpass 1,500 career points.

Ruffridge added 15, Jasmine Franklin had 11 and Abby Hipp and Sydney Manning scored 10 apiece, giving MSU six double-figure scorers for the second time this season after the Lady Bears had not accomplished the feat since 1996. Calip tied a career high with nine rebounds, Franklin added nine boards and a career-high four blocks, and MSU committed only 11 turnovers against a Valpo team that leads the Valley in steals. MSU shot 45 percent overall and owned a 42-30 rebounding edge.

The win tied the school record for regular season victories and gave head coach Amaka Agugua-Hamilton the record for most victories by a first-year MVC coach.

Previous Post: « Missouri’s Hawley: “We have allowed our medical supply chain to be compromised” (AUDIO)
Next Post: Mizzou women’s season comes to an end »