You are here: Home / Education / Missouri bill would let virtual schools count enrollment of some students, not school districts

In 2018, the Missouri Legislature passed an expansion of K-12 student access to online learning. This session, the General Assembly is being asked to let virtual schools count the enrollment of its full-time students instead of the school district where the students live. State Representative Phil Christofanelli, R-St. Peters, wants to give state funding tied to web-based learning enrollment to the online program the students are enrolled in – not their local school districts. 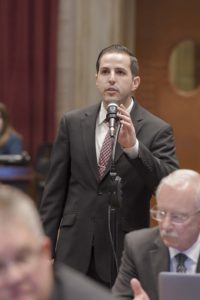 Christofanelli’s legislation could have the backing of Gov. Mike Parson, who said in his State of the State address this year, that he wants to expand virtual schools.

The Missouri House Elementary and Secondary Education Committee held a public hearing this week on the legislation. During the hearing, Christofanelli says public schools have fought online learning opportunities for kids.

“Unfortunately, students have been attempting to access virtual education across our state. Some school districts and some superintendents have put up every barrier conceivably possible to try to keep those kids in the school district and not in the virtual school against their parents wishes,” says Christofanelli.

“When seeking information or looking to enroll in a virtual program, parents have been actively discouraged by school district administrators and in some cases have had their requests arbitrarily denied without cause,” says Cook. “Families don’t need much to be successful, but we do need access to information and cooperation and support from the institutions that are supposed to educate the children under the law.”

According to the Missouri Department of Elementary and Secondary Education, the state has roughly 286 students enrolled in virtual schools full-time. Another 469 are doing online courses on a part-time basis.

Christofanelli’s measure would also take away the authority of districts to terminate, monitor or change the course offerings to students and give it to the Missouri Department of Elementary and Secondary Education. He indicates that he wants a universal statewide policy about which students should use online schooling.

“We have unfortunately created a system where the over 500 superintendents in this state can all have a different policy as to which students should or should not be enrolled in a virtual school in this state and that creates a number of problems,” says Christofanelli.

The provision didn’t sit well with Independence School District Superintendent Dale Herl. He says it removes local control in determining whether online learning enrollment is in the best interest of each student.

“The proposed legislation conflicts with federal law, IDEA (Individuals with Disabilities Education Act) specifically. Any state that accepts federal dollars commits to furnish a free, appropriate education. By removing the school district and the IEP (Individualized Education Program) team from the education decision making process, this is a violation of IDEA,” he says.

Herl says the bottom line is the proposed law is about privatizing education and making a profit.

“There are those who would say ‘Isn’t it a parent’s right to choose whether they take online courses or not – they meaning their child?’ My answer to that is absolutely, but it is not the taxpayers of the state of Missouri’s obligation to pay for this,” says Herl.

Andy Turgeon, superintendent of Knox County R-1 School District, says his district has used virtual schools in the past. The district currently does not have any students enrolled in online courses.

“We’re not opposed to giving students opportunities. We are the only school in our entire county. So, we find ourselves trying to create opportunities for our kids. We’ve added programs every year. We’ve said for years, every child is gifted. Our job is to find out what that gift is, what their passion is and develop it. To do that, we have to offer opportunities,” he says.

But, Turgeon questions the level of monitoring of virtual school student performance.

“As a district, it’s a personal insult to sit here and listen to people say ‘All you care about is money.’ No it’s not. I care about every student and I know every single student in my school district. I know what this kid responds to. I know what this kid needs. But when they enroll in a program like this, they become a number. They don’t have a mentor. They don’t have someone that’s going to be there. We’ve added counselors. We’ve added a psychiatrist. We’ve added protections. We’ve added all these things to support these kids,” he says. “If you do this, who’s going to monitor this because you have the responsibility to make sure that our kids are getting the best education possible. Do you know that these companies are doing that or are they after the dollar?”

By law, Christofanelli says all Missouri public school districts should be showing this information in some fashion. The details could be a handout – not necessarily online. Information about how many districts provide handouts, instead of an online display, was not given during the hearing.

Under his bill, districts who fail to provide this material would be fined $100 per day.

The House committee has not yet voted on the measure.

The legislation is House Bill 2491.