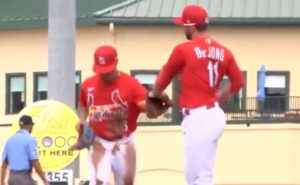 No exaggeration when I say this. Doesn’t matter that it was spring training, it may be one of the best glove flips to start a double play that you will ever see. Cardinals Gold Glove second baseman Kolten Wong dove on the shortstop side of the bag and flipped to Paul DeJong at second who relayed the throw to first to complete a double play on a ball hit by Houston’s Alex Bregman