You are here: Home / News / St. Louis is a step closer to having a Major League Soccer Stadium 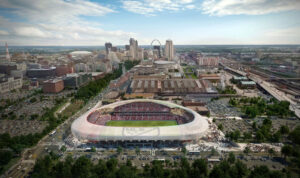 An HOK Image of where a new MLS stadium would be built in downtown St. Louis

A new Major League Soccer Stadium in St. Louis is one step closer to becoming a reality. The St. Louis Board of Aldermen has given final approval on two bills critical to constructing a new stadium in downtown St. Louis. Both bills passed by a vote of 22-1. President of Board of Aldermen Lewis Reed calls this a victory for the city.

“I just very, very happy. It’s an exciting day for the city of St. Louis,” he says.

Alderwoman Sharon Tyus being the lone no vote.

“When I voted no on the Rams deal, I said that I am an attorney. I can read. That’s it not a good deal that you left a loophole that says in 15 or 20 years, if we don’t have the same stadium – the top of the line – then we will let them leave. That was a dumb idea in 1991. And what happen, they took that very loophole. So, no. I think that I am going to use whatever I have to get them to do development in north St. Louis,” she says.

Construction is expected to begin later this year and is anticipated to be completed in 2022.