(NASCAR)—Alex Bowman dominated the last third of the race at Fontana, California, saw his nearest competitor head to the pits with three laps left and a tire with cord showing, and picked up his second NASCAR Cup win.

He led 67 of the last 73 laps, giving up the point only during green flag pit stops. 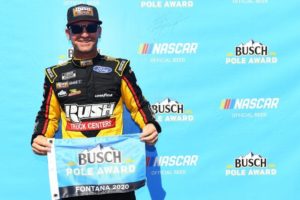 Sometime Missourian Clint Bowyer started on the pole, only the fourth pole in a 509 Cup races, a career that started in 2005. He was the last driver to qualify and edged Jimmie Johnson by .007 seconds, the equivalent of about two feet. Bowyer, known for his sense of humor, joked afterwards that sharing the front row with Johnson, a seven-time Cup champion and six-time winner at the California Speedway, would be good exposure for his sponsors because he would be in more photos with Johnson, who was making his last run at what he considers his hometown track.

Looking forward to the race, he commented that the track has been good for him although he has had trouble finishing in a contending position. He has three top-three finishes and no wins in 20 races there. “Beating them by an inch…would be great for me,” he said. 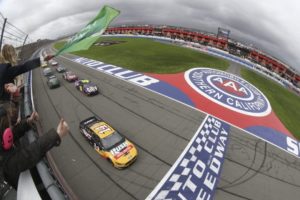 He led the field to the green flag and led the first ten laps but he caught the outside wall after a valve stem failure on one of his tires on the 93rd lap. He finished a lap down, 27th. Bowyer started the season well, moving from 29th at Daytona to sixth at the end. But the last two races have been the reverse of that. Both have been top-ten starts with finishes of 12th and 27th, leaving him 16th in the points.

NASCAR runs at Phoenix next week.