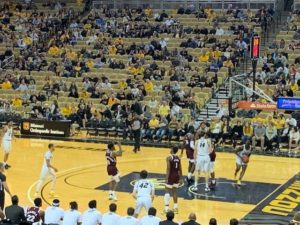 The Missouri Tigers were just 6-for-29 from three-point range in a 67-63 loss to Mississippi State on Saturday afternoon at Mizzou Arena. The Tigers fall to 14-15 overall and 6-10 in SEC play.

Xavier Pinson led the Tigers with 20 points but was only 7-of-20 from the floor and 3-of-9 from three-point range. Dru Smith finished with 19 points, a team high nine rebounds, including six offensive boards, to go along with an assist, a blocked shot and three steals.

Tyson Carter finished with 15 points, Nick Weatherspoon and Reggie Perry each had 12 for Mississippi State who beat Mizzou by 27 earlier this season.

Mizzou plays at Ole Miss on Wednesday before concluding the regular season next Saturday at home against Alabama.