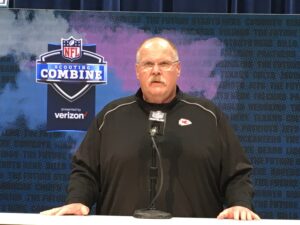 (Indianapolis, IN) — Chiefs head coach Andy Reid and general manager Brett Veach head up the team’s delegation at the NFL Combine in Indianapolis. Veach said keeping pending free agent defensive tackle Chris Jones is a priority and the franchise tag remains a possibility. The Chiefs draft last in the first round, 32nd overall, after winning the Super Bowl. The Chiefs do not have a draft pick after the fifth round.

Previous Post: « Blues prove to be too much for Hawks in third period comeback
Next Post: Missourinet Morning News 2-26-2020 (Audio) »