Logano got in front on the last restart and stayed there for the two laps to the checkered flag.

Logano and six other drivers skipped pit stops taken by everybody else under the last caution period then outran Matt DiBenedetto under the green-white-checker format.

Driver Ryan Newman missed his first race after 649 consecutive starts in the Cup Series. He issued a statement saying he’s still recovering from a “head injury” suffered in his horrific crash at the end of the Daytona 500. Newman walked out of the hospital less than forty-eight hours after the crash.

Newman had the second-longest consecutive start list among active Cup drivers. Jimmie Johnson, who is retiring from fulltime driving at the end of the year, started his 650th straight race at Las Vegas. 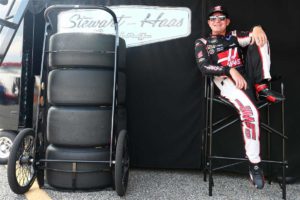 Sometime-Missouri Clint Bowyer (right) is tied with Martin Truex Jr., for fifth on that list, both at 506. Kevin Harvick, with 642 straight starts is right behind Johnson and Newman.

Newman says he’s eager to get back into a racing car. There’s no timetable for him to do that. Ross Chastain, considered one of the busiest drivers in NASCAR, filled in for Newman at Las Vegas. He finished 27th after spinning on the backstretch with two laps to go.

(INDYCAR)—We talked last week with Jay Frye, the former Mizzou Tiger who is President of IndyCar, about safety in the wake of Newman’s crash, about the new ownership of the IndyCar series and the Indianapolis Motor Speedway, the pursuit of a third engine supplier, and other issues. We plan to post that interview later this week. IndyCar’s season begins in less than three weeks when the cars race on the street course of St. Petersburg, Florida.