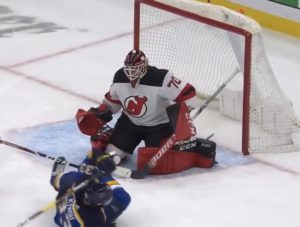 (St. Louis, MO) — Ivan Barbashev scored twice as the Blues blanked the Devils 3-0 at the Enterprise Center to snap a five-game losing streak. Jaden Schwartz added a goal and Jordan Binnington pitched a 17-save shutout for St. Louis, which took the lead in the West with 76 points. The Blues host the Coyotes tomorrow night.

(St. Louis, MO) — Jay Bouwmeester won’t be returning to the Blues’ lineup for the near future. St. Louis has placed the 36-year-old defenseman on long-term injury reserve a week after he suffered a cardiac episode on the bench in Anaheim. Bouwmeester had a cardioverter defibrillator implanted into his chest at an Orange County Hospital and returned to St. Louis on Sunday. Bouwmeester released a statement saying he is on the road to recovery. The game against the Ducks was postponed in the first period and has been rescheduled for March 11th.

(St. Louis, MO) — Marco Scandella is joining the Blues. St. Louis acquired the defenseman from Montreal for a second-round pick in 2020 and a conditional fourth-rounder in 2021. The 29-year-old has dressed in 51 games between the Canadiens and Buffalo Sabres this season, with four goals and eight assists. Scandella was originally drafted by Minnesota in the second round in 2008.