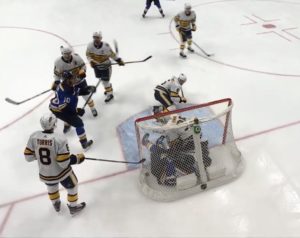 (Nashville, TN) — Kyle Turris scored the tiebreaking goal with 2:12 remaining in regulation as the Predators swept a home-and-home with the Blues with a 2-1 win in Nashville. Tyler Bozak got the lone goal and Jordan Binnington made 22 saves for St. Louis, which has lost five straight. The Blues are tied with Dallas for first in the West with 74 points. They host the Devils tomorrow.

(Ottawa, Ontario) — Artem Anisimov scored with 72 seconds left in the overtime period to lift the Senators to a 4-3 win over the Stars in Ottawa. John Klingberg, Stephen Johns and Joe Pavelski lit the lamp for Dallas. Anton Khudobin made 42 saves in defeat. Dallas is 4-0-and-1 in its last five games and returns home Wednesday to meet the Coyotes. With the point in Sunday’s OT loss, Dallas has tied St. Louis with 74 points in the Central Division. Each team has played 59 games.

(Anaheim, CA) — The postponed game last week between the Blues and Ducks is rescheduled for March 11th in Anaheim. As a result, the Panthers versus Blues game originally scheduled for March 10th has been moved to March 9th at the Enterprise Center. Last week’s game was but postponed by the NHL after St. Louis defenseman Jay Bouwmeester suffered a cardiac episode on the bench. The Blues-Ducks contest will follow the same 60-minute format of all regular-season games and begin with the score tied, 1-1, as it was at the time of the postponement.

(St. Louis, MO) — Blues defenseman Jay Bouwmeester is back in St. Louis after suffering a cardiac episode on the bench last week against the Ducks in Anaheim. Bouwmeester under went a successful Implantable Cardioverter Defibrillator procedure on Friday. The procedure restores the heart’s normal rhythm. Bouwmeester will continue to be monitored by Barnes Jewish Hospital and Washington University doctors.

(Nashville, TN) — Oskar Sundqvist is back with the Blues. The team activated the forward from injured reserve ahead of yesterday’s loss to the Predators. Sundqvist had missed eight games with a lower-body injury after being hurt on January 27th in Vancouver. To make room on the roster for his return, the Blues assigned Troy Brouwer to the San Antonio Rampage.