Kansas City Mayor Quinton Lucas is proposing to add more police officers on the streets. During his first State of the City address last night, Lucas says the city cannot stop caring about residents who deserve to grow old in the community. 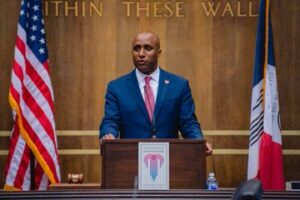 “We owe it to the victims, to their families, to our own community, to the lives we may yet save of victims and assailants,” he says. “But we also importantly recognize that more boots on the ground alone will not solve our violent crime problems. We invest this year in more social worker positions, but we also invest in more probation officers.”

“Nothing matters if we lose another 148 of our sisters and brothers next year,” he says. “If we lose 500 Kansas Citians over the next year, 1,000 over eight years.”

Lucas is rolling out his budget proposal today to detail how many extra police and probation officers and social workers he wants.

He also announced plans to work with Councilwoman Melissa Robinson on her proposal to study violent crime.

Lucas has been to the Missouri Capitol several times to meet with the governor and call for increased witness protection in violent crimes.