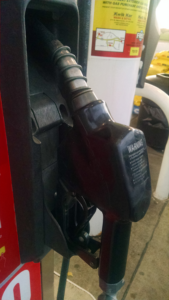 “Have you ever heard the term penny wise and a pound foolish,” asks Libla. “Well this takes care of that. We don’t need to be penny wise and a pound foolish any longer. We’re not facing the music. And the fact of the matter is, it’s facing just a little bit of music. We could do a lot. The deal is for those who don’t want to support this, we’re already almost a billion short in MoDOT.”

Sen, Bill Eigel, R-Weldon Spring, says the bill would overturn a decision by Missouri voters in 2018.

“Unlike SJR38 which we just passed out, this current legislation has no further vote from the people of Missouri,” says Eigel.

The 2018 initiative Eigel is referring to, known as Proposition D, was voted down by a 54 to 46 margin. It would have increased the fuel tax by 2.5 cents annually over four years to help pay for Missouri’s roads and bridges, and Missouri Highway Patrol enforcement. The proposal also asked voters if Missourians awarded Olympic medals should have their medals tax exempt.

The Missouri Senate did not vote on the plan.