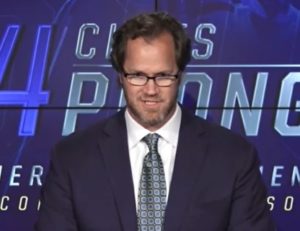 Chris Pronger’s No. 44 jersey will be raised to the rafters at Enterprise Center. The date for the jersey retirement has not yet been determined and will be announced after the release of the 2020-21 schedule.

Pronger was originally acquired by the Blues in a controversial trade that sent fan-favorite Brendan Shanahan to the Hartford Whalers on July 27, 1995. During his nine seasons with the Blues, Pronger played in 598 regular-season games and tallied 356 points (84 goals, 272 assists) and 931 penalty minutes. Pronger was a four-time All-Star as a Blue, finished in the Top 5 of the Norris Trophy voting five times and in 2017, was named one of the “100 Greatest Players” by the NHL.

Listen to his press conference:

Previous Post: « Battlehawks win their first XFL game
Next Post: The XFL is sending a wake-up call to the NFL. Cuonzo calls on Mizzou to rally…more often (PODCAST) »