Fox Sports’ Mike Joy’s call of the finish of NASCAR’s first race of the new season caught the chaos of the non-points kickoff of NASCAR 2020. 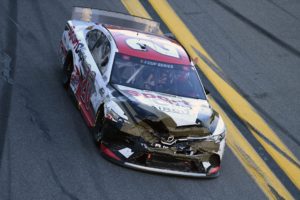 Erik Jones’ battered car was pushed across the finish line by teammate Denny Hamlin, whose own car was badly wrinkled by a series of late-race crashes that eliminated twelve of the eighteen starters and forced the race into three overtimes totaling thirteen extra laps.

Hamlin was a lap down. Jones and four other drivers—Austin Dillon, our adopted Missourian—Clint Bowyer—Kyle Larson, and Ryan Newman were the only ones to survive multiple crashes to finish on the lead lap.

The Clash is the first competition for NASCAR each year, a week ahead of the Daytona 500. Qualifying earlier Sunday set the front row for next week’s race with Ricky Stenhouse, Jr., taking the pole and Alex Bowman will start on the outside. Two qualifying races next Thursday will establish the remaining thirty-eight starting positions.

(INDYCAR)—IndyCar’s first race is March 15 at St. Petersburg, Florida, but its first major event of 2020 will be a full-field test on the Circuit of the Americas Tuesday and Wednesday. 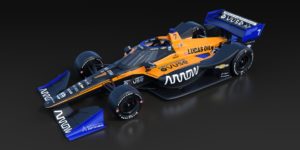 Twenty-five cars and twenty-six drivers will take part, the first test major test of the new aeroscreen cockpit safety device. Single-car and two-car tests during the offseason have finalized the design that will protect the driver from flying debris during races. The event will be livestreamed on IndyCar.com.

IndyCar begins the year with a new owner. During the offseason, Roger Penske bought IndyCar and the Indianapolis Motor Speedway. 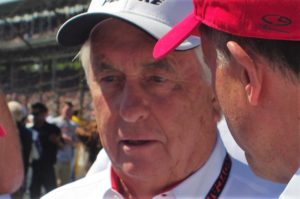 He becomes just the fourth owner of the speedway in its 112-year history. Carl Fisher built the track, which hosted its first events in 1909 and the first Indianapolis 500 in 1911. He later sold the track to World War I hero Eddie Rickenbacker in 1927. Rickenbacker sold the track in 1945 to Tony Hulman and Hulman & Co., which sold it, and the racing series, shortly after the 2019 racing season ended.

McLaren returns to the sport as a team, not just a sponsor, for the first time since 1979. The team will be relying on two youngsters, Patricio O’Ward, the 2018 Indy Lights Champion, and last year’s Indy Lights champ Oliver Askew.

(FORMULA 1)—Formula 1 hits the streets for the first time, also on March 15, with the Grand Prix of Australia. F1 will return to the old-fashioned checkered (or as they say in FI “chequered”) flag to mark the end of races after last year’s use of a checkered light panel. The light panel has been discarded because it came on one lap too soon at the Japanese Grand Prix last year.