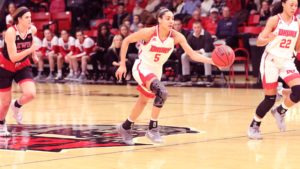 In a showdown between two of the top teams in the Great Lakes Valley Conference Thursday night, the number one ranked and first-place Drury Lady Panthers had an easy time against the Lewis Flyers, claiming a decisive 114-63 win at the O’Reilly Family Event Center and moved to 22-0 overall and 13-0 in GLVC action.

Despite the offensive output, it was Drury’s relentless defensive pressure that set the tone, as the Lady Panthers tallied 22 steals and forced 29 Flyer turnovers in controlling the contest from the onset. 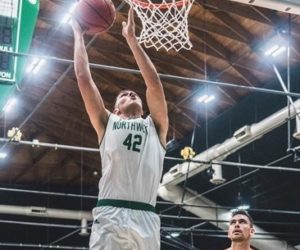 The Bearcats won their 13th straight game and moved to 21-1 overall. The Bearcats are now 11-1 in MIAA and have won 46 of their last 47 home league contests. Central Missouri falls to 9-12 overall and 4-8 in MIAA play. Northwest extended its home-court win streak to 29 in a row. Northwest has won 67 of its last 69 home games overall.

Northwest made seven of its first 10 three-pointers to build a comfortable 31-14 lead over Central Missouri. Redshirt freshman Luke Waters made his first four shots from the field and tallied 11 of Northwest’s first 22 points. Waters would later find himself in foul trouble which limited him to only 13 points in 18 minutes of action.