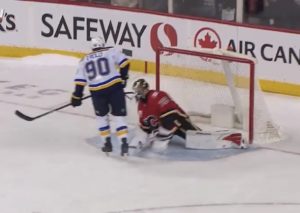 (Calgary, Canada) — David Perron posted a goal and an assist before scoring the deciding goal in the shootout in the Blues 5-4 victory over Flames in Calgary. Zach Sanford had a goal and an assist for St. Louis, which snapped a three game losing skid. Alexander Steen and Jaden Schwartz also lit the lamp in the win. The Blues visit the Oilers Friday night.

(Calgary, Canada) — The Blues are waiting for an update on Oskar Sundqvist’s injury. Sundqvist missed last night’s win over the Flames after suffering a lower-body injury against the Canucks on Monday. The team isn’t sure if it will be a long-term injury. Sammy Blais took Sundqvist’s spot in the lineup. Blais was just activated from injured reserve after missing 28 games with a right-wrist injury.