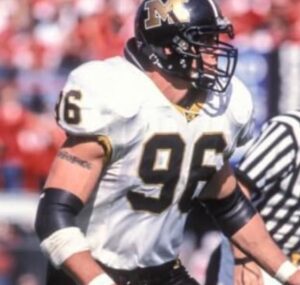 Justin Smith–In the Jefferson City Jays Football Program (MHSOF 2019), Smith helped lead the team to the 1997 state championship in Class 5 – the largest in Missouri – and earned All-State honors. At Mizzou, he was a two-time All-Big 12 selection, First Team All-American as a junior in 2000 and left holding the Mizzou career quarterback sacks record, with 22.5 – a record he set only three seasons. (The record now stands at No. 2 all-time.)

Derrick Johnson–Remembers the experience of Arrowhead

“There is an experience that I cannot explain when you walk on the field and see the sea of red cheering for you,” Johnson said. “The loudest fans in the NFL are in Kansas City, and I will remember and cherish that for the rest of my life. There is nothing like driving to the game on a Sunday afternoon seeing and smelling all the barbecue in the parking lot. Tailgating in Kansas City is very old-school and authentic. The scene and vibe is so special.”

Brad Zeigler–A 1998 graduate of Odessa High School, Ziegler pitched Missouri State University to the 2003 College World Series and later made a name for himself as a submarining relief pitcher – that is, a groundball machine – for four big-league clubs (Oakland Athletics, Arizona Diamondbacks, Boston Red Sox, Miami Marlins) between 2008 and 2018. The right-hander broke in by throwing 39 scoreless innings to open his career, shattering a 101-year-old MLB record (25) and garnering an eighth-place finish in 2008 American League Rookie of the Year voting. Overall, he pitched 717 1/3 innings, and his 739 relief appearances rank 81st all-time, despite not making his debut until he was 28.