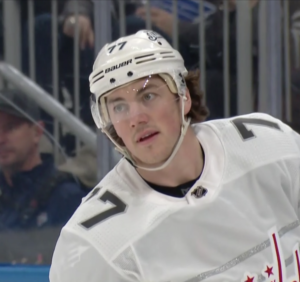 (St. Louis, MO) — Sharks forward Tomas Hertl scored the go-ahead goal as the Pacific Division topped the Atlantic 5-4 at the NHL All-Star Game in St. Louis. Hertl had five total goals on the night in the two wins for the Pacific, who defeat the Central Division 10-5 to reach the final. Golden Knights forward Max Pacioretty finished with a goal and two assists for the Pacific. Bruins forward David Pastrnak was named the All-Star Game MVP. The Atlantic defeated the Metropolitan Division 9-5 in the prior game.

T.J. Oshie didn’t want his father to miss the All Star Game.

The former St. Louis Blues forward, who played in St. Louis for seven season was voted by fans to represent the Washington Capitals for the Metropolitan Division in the 2020 Honda NHL All-Star Game at Enterprise Center on Saturday. Oshie arranged for his father to make the trip from Seattle right away. Tim Oshie was diagnosed with Alzheimer’s disease in 2012 and missed the Capitals’ mentors trip in December. T.J. made sure he was there to see him play in his first All-Star Game, particularly with it being held in St. Louis. Oshie had a goal and an assist, but the Metropolitan Division lost 9-5 to the Atlantic Division in the semifinals.

Craig Berube, coach of the Blues and the Central Division, used an all-Blues starting lineup, of course, and the fans treated the Central Division as the home team, chanting “Let’s go Blues.” Even Chicago Blackhawks forward Patrick Kane, who was booed all weekend for representing a division rival, was cheered when he scored. 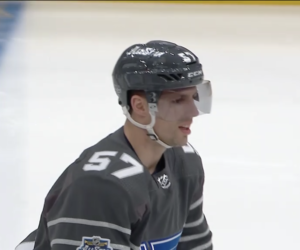 David Perron scored in his first NHL All-Star Game, and it was Alex Pietrangelo and Ryan O’Reilly that set him up.

Previous Post: « Scoring drought to start second half too big of a mountain for Mizzou to climb at WVU
Next Post: Missourinet Morning News 1-27-2020 (Audio) »