You are here: Home / Education / What you need to know about Parson’s proposed K-12 schools budget

Gov. Mike Parson is proposing $3.56 billion in base funding for Missouri’s K-12 public schools – a $10 million increase compared to the current fiscal year. Under Parson’s requested state budget that begins in July, the amount would fully fund the formula used to finance the state’s 518 public school districts. 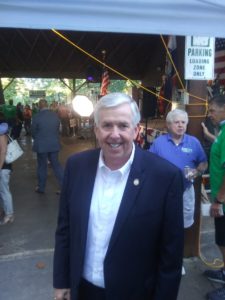 Parson’s budget outline calls for $117 million to bus kids to and from school. The requested amount is $10 million more than the current year’s school transportation budget. The Department of Elementary and Secondary Education is about $185 million short of full transportation funding and it has been trying to close the gap by asking for an increase over a multi-year period.

During last week’s State of the State address, Parson said he also wants the state to expand access to virtual education for high school students and those who are home schooled. He wants to pump an extra $500,000 into the Missouri Course Access and Virtual School Programs next fiscal year for the statewide expansion of an online learning platform.

Parson’s budget outline gives about $281,000 more to the Missouri Charter Public School Commission, along with the addition of two new positions.

Under the governor’s fiscal plan, it calls for $21 million for Parents As Teachers – the same level of funding as the current budget year. The organization provides services to high-need families seeking help with the successful educational outcomes of their children. The request would help 538 high-need families on a wait list for services.

Parson is proposing that $750,000 goes to certify about 12,000 new high school students as work-ready. Parson says the effort could open doors to students not sure if college is in their immediate plans, but still put them on a path to greater opportunities.

“We need to ensure our students understand the many opportunities out there, whether it be going into the workforce, the military, a community college, a technical school, or a four-year degree,” said Parson.

Parson says about 30% of Missouri’s population has a four-year degree from a college or university.

Now that Parson has sketched his fiscal desires, Missouri House and Senate members will roll up their sleeves this week and get to work on the state budget.