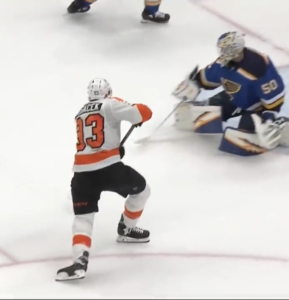 (St. Louis, MO) — Jakub Voracek scored in overtime to lift the Flyers to a 4-3 win over the Blues in St. Louis. Tyler Pitlick and Michael Raffl lit the lamp in a three-minute span in the second period for Philly, which won for the third time in four games. Alexander Steen and Ryan O’Reilly scored in the third period for the Blues, who rallied from a two-goal deficit to force OT. St. Louis had its franchise-record-tying nine-game home winning streak snapped.

Elsewhere in the NHL:

(Montreal, Quebec) — Zack Smith scored twice in the first period, including shorthanded, as the Blackhawks skated to a 4-1 win over the Canadiens in Montreal. Alex DeBrincat added a power-play tally in the second and Drake Caggiula extended the advantage in the third. Corey Crawford stopped 32 shots for Chicago, which notched its third straight win. Phillip Danault had the lone Montreal marker 54 seconds into the second period to make it a 2-1 game. Charlie Lindgren allowed four goals in 28 shots for the Habs, who had won their previous two.

Previous Post: « Missouri lawmakers on both sides react to governor’s State of the State (AUDIO)
Next Post: A healthy Mahomes expects more from the Chiefs this Sunday (PODCAST) »