You are here: Home / Business / Cody Smith: Missouri revenue has been strong enough to avoid withholds

Missouri’s governor will outline his legislative priorities and will release some details of his budget blueprint during Wednesday’s State of the State Address in Jefferson City. 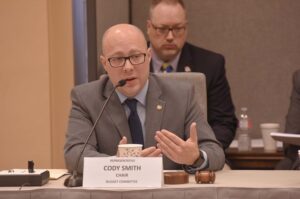 State revenues have been increasing.

The state Constitution requires Missouri lawmakers to approve a balanced budget by early May.

Once the governor unveils his proposed budget, each agency and statewide elected official will testify before the House Budget and Senate Appropriations Committees. Those hearings traditionally go well into February.