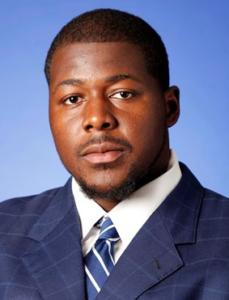 Mizzou Head Football Coach Eliah Drinkwitz has added offensive assistant coach Marcus Johnson to his new staff. Johnson comes to Mizzou after spending the past four seasons coaching the offensive line at Mississippi State (2018-19) and Duke (2016-17). Details of Johnson’s contract with Mizzou were not released at this time. A nine-year coaching veteran in all, Johnson was first an All-SEC offensive lineman in his playing days at Ole Miss, and later played in 53 NFL games (making 18 starts) over five years with Minnesota and Tampa Bay.

“I’m excited to add Marcus and his family to our family at Mizzou,” said Drinkwitz. “The experience he brings as a player and coach in the SEC, coupled with the success he’s had as a player in the NFL and developing a lot of guys who have made it to that next level, make this a great hire for our program.

Johnson began his coaching career at Duke for his college coach David Cutcliffe, serving various roles over a seven-year period (2011-17) that saw the Blue Devils make five bowl appearances. Duke had not appeared in a bowl game since 1995. After beginning at Duke as an assistant strength and conditioning coach (2011-12), he broke into the coaching side in 2013 as an offensive quality control assistant. That year, Duke finished 10-4, winning the ACC’s Coastal Division and finishing as the first Blue Devil team in 52 years to end a season ranked in the Associated Press poll (No. 23 final ranking).

“I’m absolutely excited about the opportunity to work with Coach Drink and be part of the Mizzou program,” said Johnson. “I think Coach Drink is one of the top young, innovative coaches out there, and this is an amazing opportunity for me to continue to grow and develop in the profession. My family and I are looking forward to this new chapter in our lives and I’m excited to get to work learning everything I need to know about Missouri.”

Johnson spent three years in the quality control role at Duke before being promoted to offensive line coach for the 2016-17 seasons. During the 2017 campaign, Johnson worked with third-team All-ACC center Austin Davis, who was also one of four team-elected captains. Johnson’s offensive line opened holes for Duke to have two 200-200 performances as the Blue Devils reached the Quick Lane Bowl. Off the field, Johnson oversaw the selection of offensive tackle Gabe Brandner to the CoSIDA Academic All-District first team and Allstate AFCA Good Works Team as well as being a semifinalist for the National Football Foundation William V. Campbell Trophy and Wuerffel Award. In 2016, Johnson oversaw an offensive front that allowed time and space for four 200-200 performances during the season.

A standout offensive lineman in his playing days at Ole Miss (2001-04), Johnson earned second-team All-SEC honors as a senior co-captain under Cutcliffe. He helped the Rebels to 28 wins over four years and a pair of bowl game appearances. After earning second-team All-SEC honors from the Associated Press as a senior, Johnson represented Ole Miss at the 2004 Senior Bowl. He was a second-round draft pick in the 2005 NFL Draft by Minnesota, and spent four seasons (2005-08) there, helping the Vikings to a division title and playoff berth in 2008. After spending the 2009 campaign with the Tampa Bay Buccaneers, he closed his playing career with the Hartford Colonials of the United Football League.

Johnson graduated from Ole Miss in 2004 with a degree in criminal justice while minoring in sociology. He has one daughter, London. He is married to Veullana Johnson.