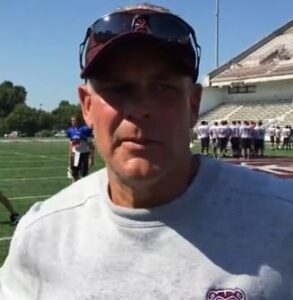 According to the terms of the agreement, Steckel, will step down from his head coaching position, and the university will provide him with a maximum buyout of $340,000, plus moving expenses. The privately-funded buyout would be payable in three annual installments with the first installment of $140,000 and two subsequent payments in January of 2021 and 2022 of $100,000 apiece, depending on Steckel’s coaching status at that time.

“We want to thank Stec for his hard work and dedication to Missouri State,” said Director of Athletics Kyle Moats. “He and I met after the holidays to discuss football-related matters, which ultimately led to this mutual agreement.”

After meeting with Steckel on Nov. 27 to discuss the future of the football program, Moats announced at that time the university’s intentions to honor its commitment to Steckel, who was under contract through the 2021 season.

“I want to thank Kyle Moats, our coaches and our players for the past five years,” Steckel said. “I cannot thank our staff and our players enough for changing the inner workings of our culture. I will always be indebted to them, and I am grateful I had this opportunity.”

According to Moats, a national search to find the program’s next head coach will begin immediately. Offensive coordinator Justin Kramer will serve as the interim head coach until a permanent replacement can been named.