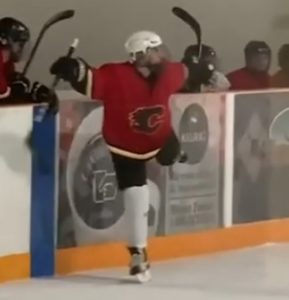 St. Louis Blues goalie Jordan Binnington is set to take on Justin Bieber in a shootout.  Binnington issued a public challenge on the pop star’s Instagram account, “10 breakaways me vs. you. You score on me I’ll dye my hair platinum blonde.”  The Stanley Cup winning goalie reached out to Bieber after watching the pop artist celebrate following a goal during a pick-up game.

Bieber responded with a counter offer, calling on the goaltender to donate 10-thousand-dollars to charity if Bieber can score on him.  Binnington accepted Bieber’s proposal.  Details on where and when the challenge will take place have yet to be determined…and it could be awhile.

Earlier this week, Bieber was on Instagram to clear the air about his appearance.

“While a lot of people kept saying Justin Bieber looks like sh–, on meth etc. they failed to realize I’ve been recently diagnosed with Lyme disease, not only that but had a serious case of chronic mono which affected my, skin, brain function, energy, and overall health.”

Meanwhile, Binnington will sharpen his skills tonight. The Blues host the Buffalo Sabres.

Previous Post: « SLU holds off GW
Next Post: Past playoff experience is nonsense talk, listen to me Chiefs Kingdom! (PODCAST) »