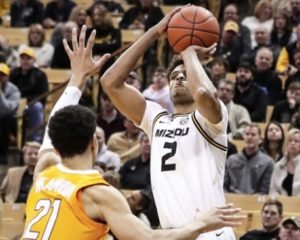 Mizzou Men’s Basketball was defeated by Tennessee, 69-59, at Mizzou Arena on Tuesday Night.

Mizzou (8-6, 0-2 SEC) was led by Tray Jackson, who posted a career high 11 points, and Mitchell Smith, who sunk a pair of threes to tie his career high. Mitchell Smith finished with 10 points, seven rebounds and three steals.

Despite a 12-0 Tennessee (9-5, 1-1 SEC) run spanning the final few minutes of the first half and the opening minutes of the second half, Mizzou was able to claw back in the game with scrappy defense. The two teams traded the lead 10 times on the night, while Mizzou was led off the bench by Jackson’s nine points in the second half to grab a 53-50 lead with 6:41 remaining.

Tennessee answered with hot outside shooting, ending the game on a 19-6 run to close out the game.

Cuonzo Martin was frustrated they couldn’t pounce on 21 Tennessee turnovers.

Mizzou will be without center Jeremiah Tilmon for an extended period of time. He has a stress fracture in his left foot. It is not the same foot he injured in practice prior to the Illinois game.

Previous Post: « Missouri Legislature gets down to business today
Next Post: Blues back in the win column »