The nation’s Secretary of Housing and Urban Development (HUD) will deliver the keynote address Thursday morning in Jefferson City at the Governor’s Prayer Breakfast. 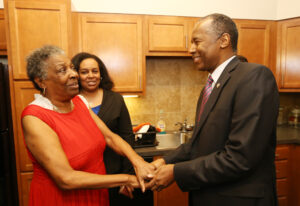 Hundreds of people are expected to pack the Capitol Plaza Hotel near the Missouri Capitol for the breakfast, which is an annual interfaith event for Missouri lawmakers and citizens.

Governor Mike Parson (R) will speak at the breakfast, and Secretary Carson will deliver the keynote. State lawmakers from both political parties attend the breakfast, which is from 7:30 to 9.

Event organizers say the purpose of the Governor’s Prayer Breakfast is to seek God’s guidance for state and legislative leaders at the start of the legislative session.

Secretary Carson was in Missouri in March 2019, to speak in St. Louis about the federal “Opportunity Zones” program. The program offers capital gains tax relief to those who invest in economically-depressed areas.

Dr. Carson spoke that day at the North Sarah Apartments, a HUD-supported housing complex that’s located in an opportunity zone.