You are here: Home / News / Kansas City sues companies as “public nuisances” for supplying guns to charged trafficker
Kansas Mayor Quenton Lucas and the city council are using a legal tactic to try to slow record-level gun violence in the city: suing gun companies for “looking the other way” in what the attorneys call obvious illegal trafficking. Lucas says the public nuisance lawsuit is against at least three companies that shipped dozens of guns to one person without the required federal background check. 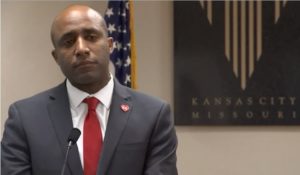