You are here: Home / Military / Missouri Congressmen weigh in on Trump’s call to attack Iranian general 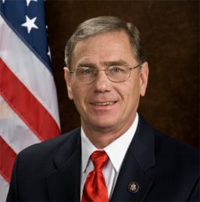 “It wasn’t necessarily a reprisal for Iran killing some folks earlier in the week and for the raid on our embassy,” says Luetkemeyer. “This is something that they have been looking at for quite some time. Soleimani has been responsible for lots of planning and various terror attacks over the years. The numbers are horrific that they equate to him or give to him for his actions.”

“Apparently he (Soleimani) was in the process of planning another series of attacks on some of our embassies and some of our places where some of our American folks meet,” says Luetkemeyer. “You had two choices – either allow him to do this or to take him out and stop this nonsense. Knowing that your information is and then looking at past history about at how this guy operates, knowing that he is going to be doing these things, let’s stop this and protect American lives and property.”