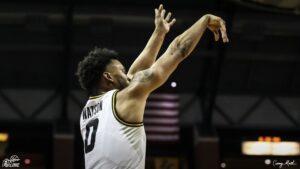 The 58-point win marked the largest margin of victory for Mizzou since beating Chicago State by 72 in 1995. The final non-conference matchup before SEC play saw Mizzou’s highest scoring half and the least amount of points scored by an opponent this season.

Mizzou jumped out to an early lead thanks to stout defense and outside shooting. At the midpoint of the first half, the Tigers had forced seven Cougar turnovers in seven minutes, and Mizzou didn’t allow a field goal in the final six minutes of the opening frame. Watson punctuated a high-octane first half offensively with a buzzer-beating 3-pointer, one of Mizzou’s season-high 16 triples on the night.

Mizzou came out strong to launch the second half, extending its lead out to 39. Watson caught fire for the Tigers, scoring 18 of his 24 points and making six of his eight treys in the final 20 minutes. Mizzou would again record its highest scoring half of the season with 46, which was capped off with triples from walk-ons Evan Yerkes and Brooks Ford, who each scored their first career points. Twelve different Tigers found the scoring column in the rout.

Previous Post: « Legislator wants Missouri’s community colleges to get a funding boost
Next Post: From “We went Blues” to Shildt losing his Shildt — the top podcast sounds of 2019 »