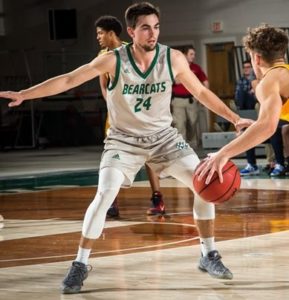 Northwest and Truman State will meet for the 198th time with the Bearcats holding a 103-94 edge in the all-time series. The programs first met in the 1919-1920 season. The Bearcats have won the last two non-conference meetings between the two schools in Maryville. Northwest posted a 90-70 triumph on Nov. 18, 2017, and then added an 87-60 victory last season in Bearcat Arena on Nov. 16, 2018.

NW Missouri State won 46 consecutive games between March 10, 2018 when they fell to Minnesota State in the first round of the NCAA Tournament and December 7 when their streak was broken by a loss to Central Missouri.

The Bearcats are led by Ryan Hawkins, who is averaging 24.2 points per game—which is 12th in the nation. He crossed the 40 point threshold twice this season with 44 against Southern Nazarene and 43 at Lincoln (MO). Brodric Thomas entered the season with a career total of 834 points. He crossed the thousand point threshold on November 30th in the win over Washburn, becoming the 30th Bulldog to reach 1,000 career points. Following the victory over Quincy on December 3rd, he has 1,029 career points—which puts him 28th on the all-time leaderboard. He sits 20 points behind Lou Gregory in 27th, who scored 1,049 points from 1969-73.