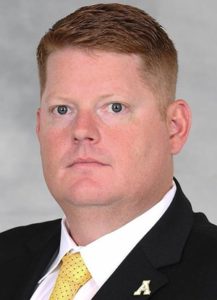 Mizzou Head Coach Eliah Drinkwitz has added Erik Link to his Mizzou coaching staff. Link, who spent the 2019 season on Drinkwitz’s staff as special teams coordinator at Appalachian State, comes to Mizzou in the same role.

During his introductory press conference, Drinkwitz said that he would have a special teams coordinator and that person would have the sole responsibility of coaching that unit.

Link has been on coaching staffs that have won one FBS national title, claimed five conference championships, and qualified for eight postseason appearances in his last eight collegiate seasons spanning from 2010-19. His App State special teams units proved to be among the nation’s best in 2019, playing a crucial role in the 20th-ranked Mountaineers’ 12-1 season that culminated with a Sun Belt Championship Game victory.

“Erik is a man of high character with a background in teaching and coaching,” said Drinkwitz. “His special teams units are detailed and very sound, and his guys play hard. They focus on effort, execution and high energy.”

“I couldn’t be more excited to join the Mizzou family,” said Link. “I am humbled at the opportunity to work with the outstanding student-athletes, coaches and staff at the University of Missouri. My family and I are grateful to Coach Drinkwitz and look forward to working every day to attack success and to embracing the Columbia community,” he said.