Kansas City Southern’s Holiday Express Train is rolling through parts of Missouri over the next week. 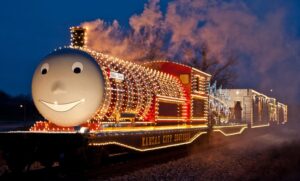 Photo courtesy of City of Joplin

For the 19th year, the festive six car train is bringing Santa and his elves to the Show-Me state. Guests can check out three of the cars that will be filled with holiday decorations.

The train will make a stop at the Union Depot in southwest Missouri’s Joplin from 4:30 to 8 p.m. Sunday. It will be in west-central Missouri’s Higginsville on Tuesday and make its final stop at Union Station in Kansas City on Wednesday.

The events are free and open to the public.

Since 2001, the project has raised more than $2 million for the Salvation Army.

By Ty Albright of Missourinet affiliate KZRG in Joplin