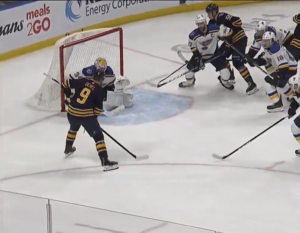 (Buffalo, NY)  —  Jack Eichel scored twice in the Sabres’ 5-2 win against the Blues in Buffalo.  Troy Brouwer and Alex Pietrangelo each had goals and Jake Allen made 28 saves for St. Louis, which lost its third in a row.  The Blues host the Vegas Golden Knights tomorrow night and the Chicago Blackhawks on Saturday.

(Las Vegas, NV) — Five different Golden Knights scored goals in a 5-1 win over the Blackhawks in Las Vegas. After a scoreless first, Reilly Smith, Deryk Engelland and William Karlsson all lit the lamp in the second to put Vegas in control. Max Pacioretty and Ryan Reaves padded the lead in the third for a 5-0 advantage as the Knights snapped a two-game skid. Dominik Kubalik scored on the power play in the final minute to break up the shutout for Chicago. The Blackhawks lost their second straight.