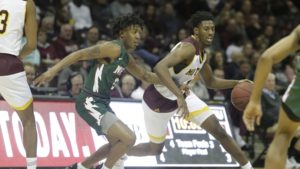 Missouri State overcame a sluggish first-half start here Friday and came out of the locker room with a convincing second-half effort in an 86-62 victory over visiting Mississippi Valley State at JQH Arena.

The Bears (5-5) led 33-32 at the intermission after the visiting Delta Devils nearly erased a double-digit MSU lead before the break. However, Missouri State jumped all over its visitors early in the second period, using a 14-2 run in the first three minutes, 39 seconds of the final stanza to push ahead by 13. From there, coach Dana Ford’s squad was relentless, forcing 19 total turnovers and posting 53 second-half points for its most-lopsided victory of the season.

The Bears, who never trailed, got 20 points and 10 rebounds from Keandre Cook for his first double-double of the season. Tyrik Dixon tallied 15 points and 6 assists, while fellow starters Lamont West and Tulio Da Silva scored 13 points apiece in the win.

MSU outscored Valley State by 11 points over the game’s final nine minutes to put things out of reach. Da Silva and Dixon started a 24-13 run down the stretch with Kabir Mohammed contributing a three-point play before the under-eight media timeout to put the Bears ahead by 17. Later, Mohammed and Cook worked in tandem with a layup and a thundering dunk to make it 71-52 with more than five-and-a-half minutes remaining.

Down the stretch, it was all Missouri State as the Bears held the Delta Devils without a field goal for the final 4:22, while collecting a three from Cook, a jumper by Josh Hall, four more points by Dixon and a triple by Spencer Brown for his first points at MSU.

Missouri State turned the ball over 13 times in the first half, but got that fixed with their second-half resurgence to finish the game with 17 mishaps. The Bears narrowly missed a season-high with 19 assists, including six by Dixon and four from Cook.

With the win, MSU improved to 4-1 at JQH Arena this season with season highs in points, field goals, field goal percentage and 3-pointers.

The Bears led by 10 points twice in the first half, but MVSU scored 18 points off the 13 MSU turnovers in the first 20 minutes to make it a one-point contest at the intermission. The Delta Devils ended the half on a 10-1 and holding the home side without a field goal for the final 3:42 of the period.

Previous Post: « Mizzou volleyball sweeps way into NCAA second round
Next Post: Mizzou shuts down Temple down the stretch to snap losing streak »