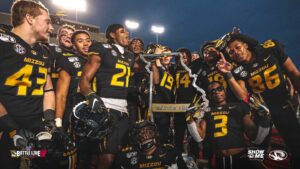 Mizzou Football claimed the Battle Line Rivalry Presented by Shelter Insurance® with a 24-14 win over Arkansas Friday afternoon (Nov. 29) at War Memorial Stadium. Mizzou QB Taylor Powell found former Razorback Jonathan Nance, who graduate transferred to Mizzou this season, for a 10-yard touchdown in the fourth quarter to put the game away.

Mizzou finishes the regular season 6-6 (3-5 in SEC play) while Arkansas falls to 2-10 and 0-8 in league contests. Mizzou has dominated its permanent cross-division rival Arkansas as of late, winning the last four meetings against the Razorbacks.

The Tigers took a 10-7 lead into intermission and got the ball back on the second half’s opening possession with a chance to extend the lead. However, Arkansas CB Greg Brooks picked off Mizzou QB Taylor Powell on the first play of the drive. Arkansas scored three plays later on a Jack Lindsey completion to Grayson Gunter for a 10-yard strike, giving the Hogs a 14-10 lead.

The four-point cushion was short-lived as Powell led an impressive touchdown drive, aided by big runs from sophomore RB Tyler Badie, who capped an eight-play, 84-yard drive with a three-yard score. Badie had 53 of Mizzou’s 84 yards on the go-ahead drive to give the Tigers a 17-14 lead heading to the fourth quarter.

The play of the game then came courtesy of redshirt freshman WR Tauskie Dove, who went up and over an Arkansas defender on third-and-10 from Mizzou’s own 36 to haul in a 37-yard reception. Five plays later, Powell connected with former Arkansas WR Jonathan Nance for a 10-yard TD strike to put the game out of reach of his former team.