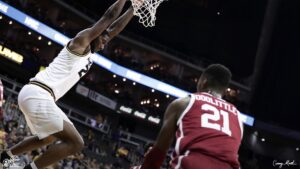 Mizzou Men’s Basketball (4-3) fell to the Oklahoma Sooners (6-1), 77-66, Tuesday night in the consolation game of the Hall of Fame Classic. Juniors Mark Smith, Jeremiah Tilmon, Jr., and Dru Smith combined for 40 of Mizzou’s 66 points, including 31 in the second half to fuel a comeback that fell short.

Oklahoma got off to a sizzling perfect 8-for-8 start from the field, as Mizzou faced an early deficit out of the gate. The Sooners led by as many as 18 in the opening half, but sophomore guard Torrence Watson kept the Tigers within striking distance, knocking down three key triples to counter Oklahoma’s hot stretch. Mizzou turned up the defense late in the frame. A 6-0 run capped off with a Dru Smith steal and a Javon Pickett layup in transition sliced the deficit to 12 at halftime.

Mizzou continued to chip away at the Oklahoma lead, as the Tigers held the Sooners to a four-minute scoring drought early in the second half. A Mark Smith 3-pointer punctuated a 9-0 run that made it a one-possession game with seven minutes remaining. Oklahoma responded, however, with tough shots, and capitalized on Mizzou turnovers to stave off the Tigers’ comeback.