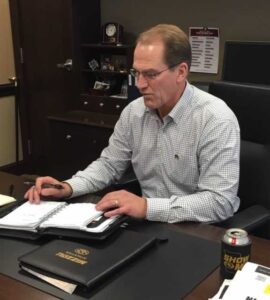 According to multiple outlets, the NCAA has denied the University of Missouri’s appeal for sanctions leveled against three programs.

For the football program, with a win Friday against Arkansas, it will mean despite a 6-6 finish, the Tigers will not be eligible for a bowl game.  They will also miss out on shared revenue with the Southeastern Conference.  That is an estimated cost in the range of $8-9 million.  Mizzou also lost it’s appeal on scholarship reductions and recruiting restrictions.

Among the penalties originally handed down by the NCAA:

On Jan. 31, Missouri was handed a bowl ban and a series of sanctions stemming from an academic fraud case after former tutor Yolanda Kumar said she had helped athletes complete schoolwork during the 2015-16 school year. Mizzou made their appeal in July. The NCAA usually takes 6-8 weeks to respond. The university waited four months.

The University of Missouri responded with the following statement:

We are deeply disappointed and appalled by the NCAA Infractions Appeals Committee’s decision to shirk its responsibilities and simply uphold sanctions that are not consistent with precedent or even common sense.

Despite this frustrating and disappointing outcome, the University of Missouri and Mizzou Athletics will continue to stand for integrity, and we will become stronger despite the challenges we are faced with today. We have outstanding student-athletes in all three affected programs and they are building something special here at Mizzou.

We are grateful for everyone who has supported Mizzou and our “Make it Right” campaign over these last several months, and during the nearly 19 weeks it took to reach this troubling conclusion.

Today’s decision raises serious questions about whether the current NCAA enforcement system encourages or discourages cultures of compliance and integrity. While we have exhausted our NCAA appeal avenues, we will continue to advocate for meaningful reform within the NCAA enforcement process.

Today, about 180 student-athletes who had nothing to do with the actions of one rogue part-time employee will pay a steep price. NCAA enforcement officials noted that prior to the violation the university employed a robust institutional system to ensure rules compliance. Once the problem was known, we self-reported immediately, held individuals accountable and cooperated with the investigation in what NCAA officials described as “exemplary” fashion.

Meanwhile, a recent case involving Mississippi State University with similar circumstances as Mizzou’s yielded a very different result. MSU, like us, acted with the highest integrity. MSU’s case followed a new NCAA process that was not available to us and resulted in an outcome that, we believe, was more reasonable given the circumstances. The inconsistency of these decisions make it difficult for anyone to comprehend how Mizzou could receive such harsh sanctions.

In its decision on our case, the appeals committee wrote that a greater discussion and a better process is needed. We could not agree more.

It wrote: “This committee believes it is critical for the NCAA membership to discuss and evaluate the application, assessment and precedential value of infractions cases not only when parties agree on mitigating and aggravating factors, but also the appropriate precedential value and approach for cases in the entirety of the infractions processes. Doing so would better equip this committee and the Committee on Infractions in discharging its duties, and in turn improve the infractions process and yield better guidance for the membership as a whole.”

We strongly disagree that the appeals committee did not have the power to correct this mistake. The point of this process was not to use a formula to reach a conclusion, but to bring the benefit of consideration and judgement to achieve consistency with its final decision.

We know our dedicated Mizzou fans will help us right this wrong by filling the stands and rooting for our Tigers. We deeply appreciate the outpouring of support from every corner of the state and Tiger fans around the country who united behind Mizzou and our student-athletes who proudly wear the Black & Gold.

Statement from Mun Choi, President of the UM System

“I could not be more upset with this decision. Mizzou supporters across the state and nation have every reason to be outraged, and college sports fans across the country should be concerned about this decision.

“I know that Mizzou’s Chancellor Alexander Cartwright, Athletics Director Jim Sterk and the coaches have done everything in their power to cooperate with the NCAA. Most of all, this decision hurts our students who have continued to give their absolute best on and off the field during this entire process.

“We are very so grateful for the support of our fans, elected officials and community as we fought these unjust sanctions. We will continue to instill and live by our Missouri values of hard work and accountability. These values are what make the University of Missouri a special place.”

Statement from Jon Sundvold, Chair of the UM Board of Curators

“The NCAA enforcement system is broken. This decision hurts student-athletes who had nothing to do with the actions uncovered and who put 110% into everything they do – their schoolwork, their practice time, their dedication to this great institution. They have put their belief into a system that should reward good behavior and discipline poor actions. Instead, we’re seeing the reverse happen, and it sets a dangerous precedent.

“Mizzou did the right thing. This ruling tells every other school that it’s better to hide the truth than to admit mistakes.

“I am absolutely heartbroken and disappointed by the committee’s decision to punish a group of 27 current student-athletes who didn’t play any role in this and have done everything right from the very beginning. The NCAA claims to value the student-athlete experience, but this decision continues to cause unnecessary harm to a group of innocent student-athletes. This unjust decision will not deter our program. We have pride in Mizzou, and we will continue to Win it Right as one family.”

“Our program as a whole is clearly disappointed with today’s news from the NCAA. My heart is specifically broken for this group of student-athletes currently on the team. These student-athletes have done everything right since becoming a Tiger, but yet are cruelly penalized for the actions of one individual from years’ past. While we obviously strongly disagree with the NCAA’s final decision, we will without a doubt rally with each other and make the most of the upcoming 2020 campaign.”

“I hate the news for our program and for our seniors who have represented the University in a very positive way. This decision negatively impacts their short experience in life as college student-athletes who had nothing to do with this situation. It’s a tough lesson to be dealt, but they will learn from this and motivationally use it later in life when hardship comes along.”