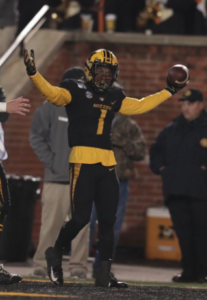 The Missouri Tigers defense was tagged 415 yards through the air and two touchdown passes in a Senior Night loss to Tennessee, 24-20 over Missouri on Saturday night in Columbia. With two injuries in their defensive secondary, the Tigers got torched for 15 plays of 15 or more yards. Josh Palmer had six receptions for 124 yards. Jauan Jennings added five catches for 115 yards and a touchdown, and Martez Callaway had six catches for 110 yards and a touchdown.

The Volunteers converted 9 of 15 third downs and outgained the Tigers 526-280.

Since starting the season 5-1 and being ranked 22nd in the country, Missouri has lost five in a row.

Mizzou blocked two field goals and forced a fumble in the second half. The Tigers also tied the game on a trick play. In the third quarter, former quarterback turned wide receiver Micah Wilson took a backwards pass from Kelly Bryant and found a wide open Tyler Badie in the endzone for a 15-yard TD. Badie’s second touchdown of the night tied the game at 17-17.