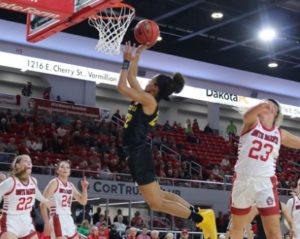 South Dakota women’s basketball knocked off the SEC’s Missouri 72-56 at the Sanford Coyote Sports Center on Thursday night. It marked the second-straight victory over a Power 5 opponent for the Coyotes, who have won six games against major schools in the last four seasons. For the Missouri Tigers, they’ve dropped four straight.

South Dakota made 47.2 percent (23-of-53) from the field while Mizzou shot 34.5 percent (19-of-55) from the floor. The Coyotes also sank 11-of-22 from behind the arc. Freshman forward Hayley Frank (Strafford, Mo.) led the team in scoring with 15 points, while senior guard Jordan Chavis (Lexington, N.C.) chipped in 11 points for Mizzou who is now 1-2 all-time against South Dakota.

The last time the Mizzou women lost four straight was during the 2014-15 season from Dec 30-Jan 8, with losses to Missouri and three straight SEC games to start conference play.

Mizzou returns home for its next contest, as the Tigers host SIU Edwardsville on Sunday, Nov. 24.

Previous Post: « Mizzou basketball heads to the beach
Next Post: A great man who had an impact on your childhood has died (PODCAST) »