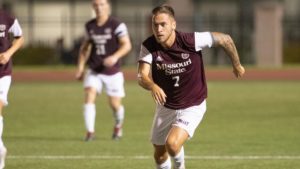 Making the program’s fourth NCAA Tournament appearance, unbeaten Missouri State (17-0-1) is set for a first-round matchup in the 2019 NCAA Men’s Soccer Tournament against Denver (6-11-3) as the NCAA Division I Men’s Soccer Committee announced the 48-team field on Monday afternoon.

The opening round match will mark the first time MSU has hosted an NCAA Tournament match as they face the Pioneers on Thursday, Nov. 21 at 7:00 p.m.

“We are excited to definitely be playing another game, the where and when doesn’t really matter,” said head coach Jon Leamy. “The good news is we get the chance to practice again today and get ready for Thursday.”

Previous Post: « The numbers back up my claim that Philip Rivers is a hack quarterback (PODCAST)
Next Post: Federal grant to address severe water shortage, some road issues in northeast Missouri »