A Missouri House interim committee that is studying local tax rates and issues will hold its final hearing on Wednesday in Jefferson City, to discuss recommendations to the full House. 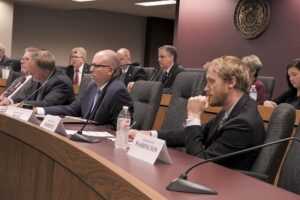 The House Special Interim Committee on Oversight of Local Taxation meets Wednesday morning at 11 at the Statehouse. The committee, which is chaired by State Rep. J. Eggleston, R-Maysville, will review testimony from prior hearings and will discuss possible legislative action on issues such as property taxes and an internet use tax.

State Rep. Phil Christofanelli, R-St. Peters, a committee member, says sales tax disproportionately impacts those with lower incomes. He has noted there are sales tax rates of 11.5 percent in the Kansas City area, and ten to 11 percent in the St. Louis region.